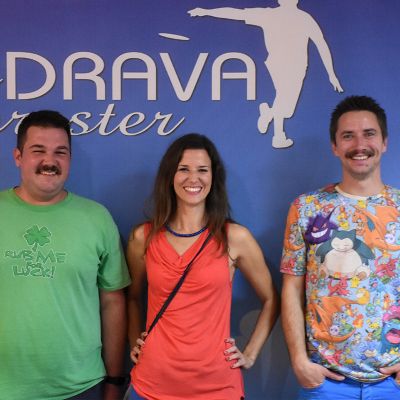 Stray Disc Tour is organized by Lagoda j.d.o.o. company that was founded in 2012 with the aim of developing a disc golf sport and related forms of tourism.

The founders of the company, siblings Dinko Šimenc and Maja Šimenc are actively engaged in sport since 2011 and have rich experience of participation in international tournaments and contacts with players from all over the World.

The company manufactures and sells all the necessary equipment for setting up courses and producing tourist and sports events. We are in the process of opening the web shop where players will be able to buy discs and all other equipment by all main manufacturers.

Lagoda j.d.o.o. so far, in cooperation with the sister company and tourist agency DMK Vall 042, has organized over 30 international disc golf tournaments, involving more than 500 players from over 30 countries. In addition to international tournaments, we also organized five Croatian Championships in disc golf.
The first international disc golf tournament in Croatia "Drava Forester" was held in November 2012 with the participation of 28 players from Croatia, Austria, Slovenia and Norway. Already next year, the tournament was a Professional Disc Golf Association event, and the number of participants nearly doubled. Players from Finland, the Netherlands, Denmark and Iceland were just some of the 50 participants from 12 countries. At the seventh edition of the tournament, held on October 31 - November 5, 2018, 100 players from 13 countries participated. Each year for the event a temporary course is designed along Varazdin sports hall "Arena” and it includes the banks of river Drava and the nearby forest park. So far some of the best players in the world like Simon Lizotte, Philo Brathwaite and Jona Baldwin have been participating in this tournament.
A crown of our work is the organization of the 12th European Disc Golf Championships, which took place from 15 to 18 August 2018 in Toplice Sveti Martin with the participation of 200 players from 27 countries.
The new development of disc golf tourism is also a nine-day travel package "Disc golf through Croatia", which was held for the first time from December 29, 2018 to January 6, 2019, where a special guest was the four-time World Disc Golf Champion - Paige Pierce.