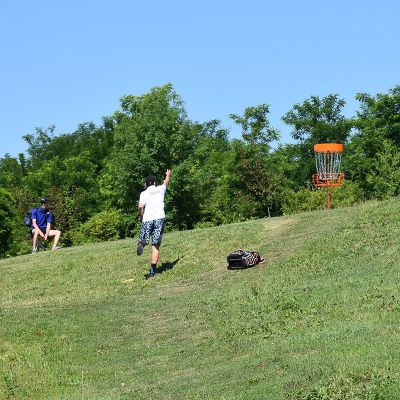 Following a cancellation of the tour in 2020 and 2021 due to Covid19 we look forward to the event returning in 2022 for it's 5th edition. Event schedule planned for 20222 edition can be found at a separate page.
The website is not yet fully updated for 2022, but that will be done during the Autumn of 2021.

Stray Disc Tour is an event that combines disc golf, relaxing by the pools and exploring Croatian nature, culture and gastronomy what makes it a perfect holiday for disc golfers, their families and friends. It lasts for nine days, and consists of three PDGA Tier C events played on three different style courses.
The central location for the event is Spa&golf resort Terme Sveti Martin where all players are staying in 4* hotel or 3* apartments.

Following a great response from participants of the first 2-day Spa Hills tournament held in 2015, we have decided to brint it to a new level and offer players the opportunity to enjoy disc golf holidays with their friends and families.
And that is how the Stray Disc Tour came about.
Sixteen competitors played all three events of the 1st tour in 2016 from Croatia, Austria, Finland, Sweden and Hungary; while an overall of 43 players played at least one round.
Players from the first tour spread the word about their amazing experiences, and as a result, the 2nd Tour saw a growth in the number of players. All locations of the Tour were played by 33 contestants from Austria, Croatia, Germany, Sweden, Finland, Estonia, Norway, Hungary and Slovenia, while 51 players played at least one round. The third edition was held in 2018 from June 30 to July 8, but this time with a bit less players due to the fact that European Disc Golf Championships were to be held at the same place just a month later and that many players were arriving for that bigger event.
In 2019 the fourth edition was played with 43 players joining in for at least one round. Competitors arrived from 10 countries - Austria, Croatia, Denmark, Estonia, Finland, Norway, Russia, Slovenia, Sweden and Switzerland.

The fifth edition of the Tour will be held from July 11 to 19, but due to the Covid-19 situation we do not expect a big growth of the player number and most of the players are likely to come from Croatia and nearby countries (Slovenia, Hungary, Austria, Serbia) but some players for other countries have also confirmed their arrival (Finland, Sweden, Ukraine).

There are 84 spots available for each round of the event, meaning that the rounds will be played by no more than 21 groups of 4 players.

Stray Disc Tour events are played in two am/pro categories - Open Men and Open Women. As it is common in the region there is no payout (to keep entry fee minimal and grow the sport) and age-based divisions are not offered. Although, a Junior division will be available in the case where 2 or more players sign up.